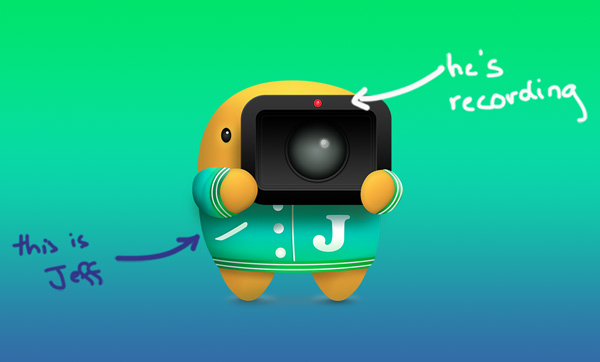 Jeff is the best way to record your screen as a GIF and share it with your friends, coworkers and followers.

Jeff was created to solve a need we had at Robots and Pencils for better communication. Often someone would have an idea, or a bug they found, or just something cool they wanted to show off, but there wasn’t a way to share it well. A common workflow some of us had was using Quicktime Player to record our screen, and then putting that video into GIFBrewery, and finally uploading with a service like Dropbox or CloudApp. This took a long time!

This GIF of Jeff was made with Jeff.

Jeff makes it as easy as clicking record (or using a keyboard shortcut), selecting the area you want to capture, and then doing whatever it is you want to show off. The recording is instantly converted into a GIF and uploaded to your Dropbox account. Then you just paste the public link where you want to show it off, like Slack. I think it’s a great way to make GIFs of bugs, UI prototypes, tutorials, or googly-eyes over someone’s face.

This was one of the first Mac apps that I worked on, and the first app that I’ve worked on that’s been released for sale on the App Store. I owned the development for the project, so it was a good opportunity to get really familiar with the Cocoa APIs specific to the Mac. I also learned a lot about how people wanted to use Jeff, and how to create a prototype to learn more about target users and their workflows.

Jeff is available on the Mac App Store for $10, you should buy it and make GIFs of everything on your screen.