Adding a Headlight Buzzer to a 1986 Vanagon

One of the first things we noticed when we got our Vanagon was that there was nothing electrically smart about it. Locks, doors, seats and lights. All of them dumb. The headlights, especially, were going to be a problem since there is no warning when you leave them on. There is, strangely, a buzzer warning if you leave the keys in and open the driver’s door, but you can’t it lock from the outside without the keys anyways. Engineers…

There are a few different existing methods to add a buzzer warning when you leave the headlights on, but they seemed poorly designed or wouldn’t work with our particular van. I specifically didn’t want to have to add another buzzer or monkey patch the fuse box. GoWesty has a “kit“ (it’s a \$7 wire) to tie the headlight switch into the stock buzzer, but it only works with certain switches and ours isn’t one of them. I’m guessing they changed in 1987 or mid-year ‘86 or something.

So there’s already a driver’s door switch and a buzzer used to warn when you leave the keys in. There’s a headlight switch that we can’t use directly, or maybe you could, but I ignored this as it saved me from taking the dash apart. So how do we also sound the buzzer when the lights are on? Turns out that there’s a terminal on the back of the fuse box that is high (+12V) when the license plate light is on at the back of the van, and that corresponds to the headlights being on. By joining the ignition key switch and license plate light signals it would sound the buzzer when we wanted.

With that information, I was finally able to make the circuit I needed. First, I connected a yellow wire to the G9 terminal on the back of the fuse box with a spade connector. Terminal G9 is, if you tilt the top of the fuse panel down towards the floor and all of the wires are coming out of the box towards you, the top right-most spade terminal in a group of ten of them. It’s also labelled in the Bentley guide. 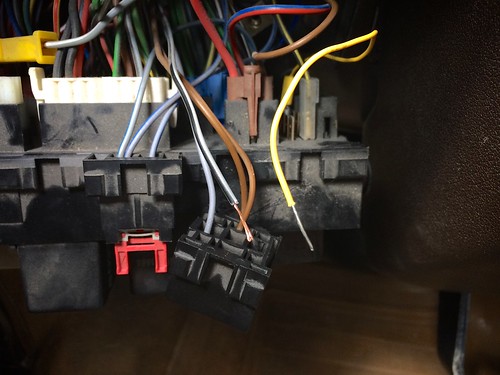 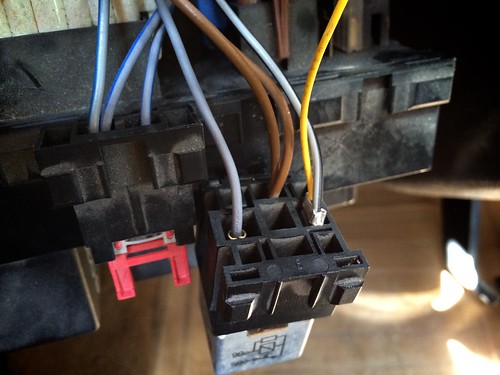 It took some plier work to get this spade socket, a 12 gauge I believe, back into the relay socket. I probably could have hooked up a diode to the ignition key switch connection (and vice versa) just to make sure nothing weird happened when the light connection went high, but it’s not like there are any fragile electronics in there.

That’s pretty much it, other than putting it all back together again, and now you can rest assured that a really terrible sounding buzzer will warn you when the lights are on.