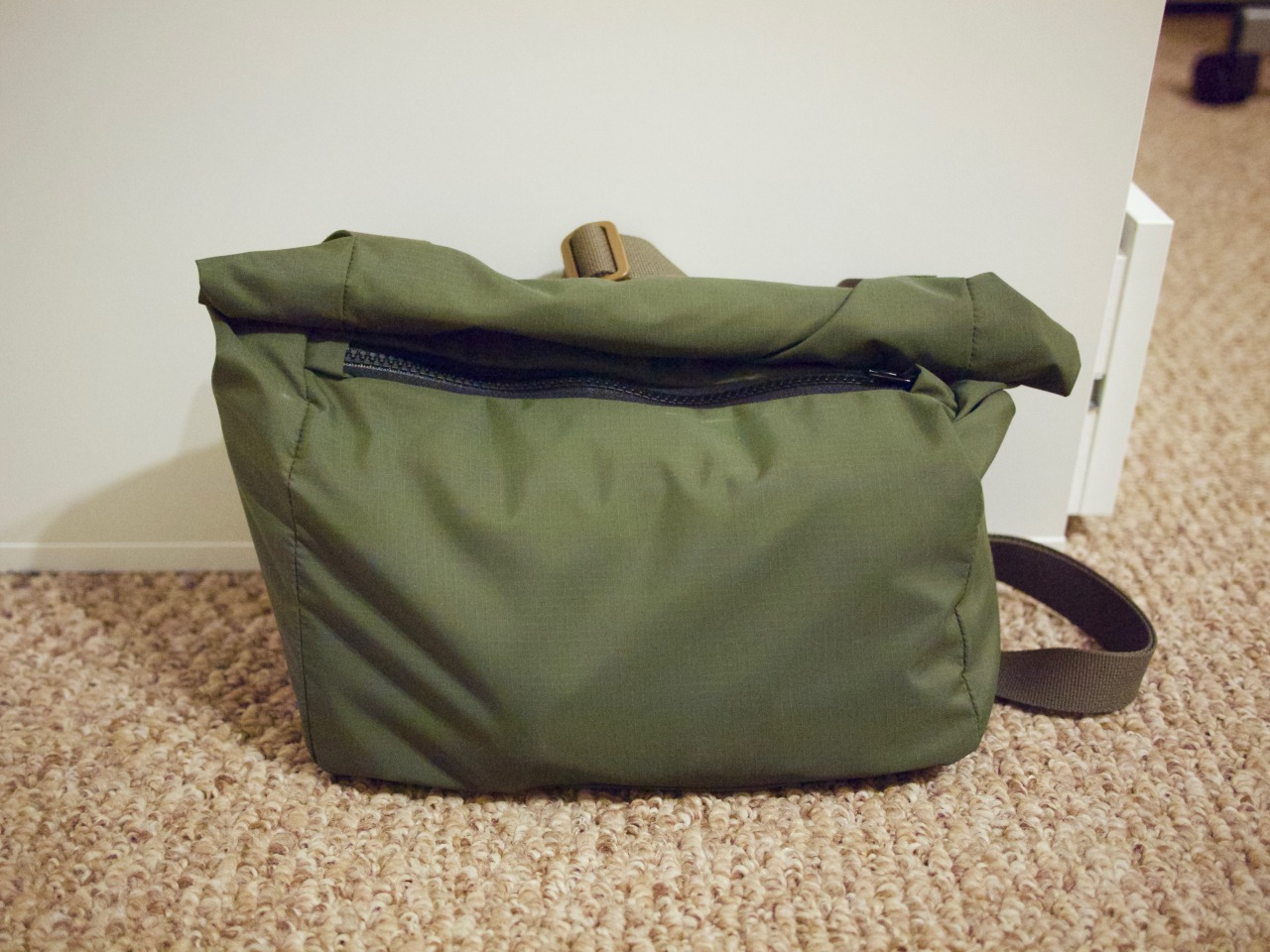 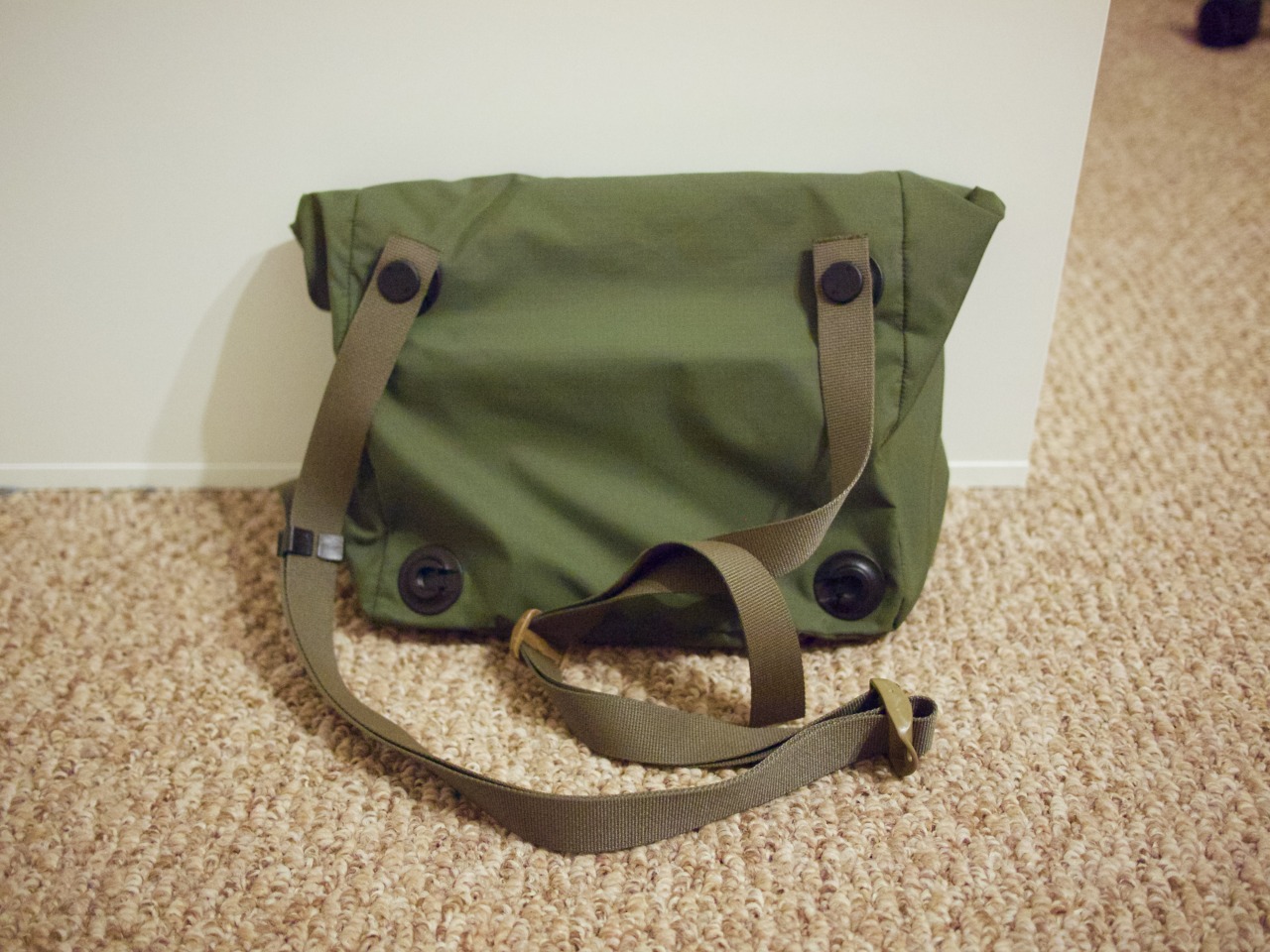 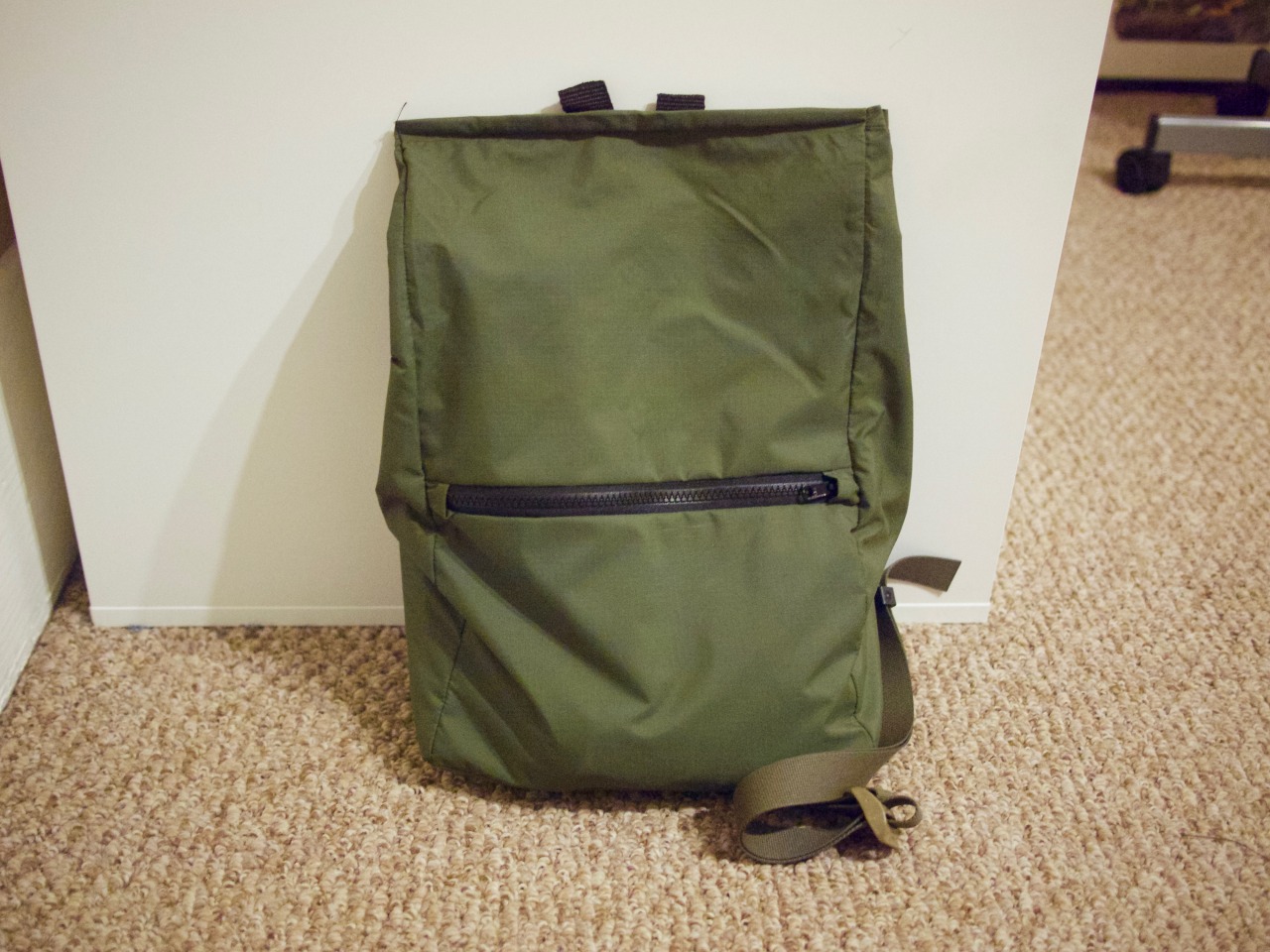 I had finished assembling the first version of this bag a few weeks ago based on some sketches that I’ve been refining for a long time. It’s like a small roll-top messenger or sling with straps that can change configuration in order to wear it as a backpack. I wanted something small that I could carry an iPad, camera, notebook and paperback while walking around a city. The roll top and backpack configuration allows me to carry a laptop or some groceries if I need to, but this would be an exceptional case.

In the top opening there are two thin metal bars with rare earth magnets to hold it closed, and two webbing tabs to pull it open. I had offset the tabs in order to make it easier to grab them, but I think that having them partially overlap would actually make it more clear which tab is meant to pull which way. I also haven’t installed anything to keep the top rolled down and snug. The original idea that I had was to put another magnet about halfway down the bag, but I’m not sure anymore if it would be strong enough with all of the rolled fabric around the metal and magnets on the top edge. I’d avoided a strap for aesthetic reasons, so if the magnet isn’t an option then I may just let the top fold down over the bottom half instead of rolling.

The Fidlock hardware is definitely clever, and I can imagine these particular kinds of attachments being useful in some situations, but I’m also a little concerned that they release too easily, or rather that the attachment points I have on this bag can’t afford to have any direction in which the strap can be pulled to detach it. Because the attachment can rotate also means that if the strap is twisted and the wearer attempts to untwist it and the connection rotates, the bag may detach and drop to the ground. I might need to revisit the G-hooks I’d originally planned to use, even though they aren’t quite as futuristic.

In the second photo you can see the hardware used to connect the straps to the bag. After trying out the bag with weight in it I quickly realized that having those top attachment points on the back side of the bag (against the wearers back) causes the contents to fall away from your back when you wear it. I think this is exacerbated by the extra fabric available from the roll top near where the attachment points are. This was something that I didn’t consider at all while sketching and was interesting to learn the hard way, and so I’ll need to better consider the realities of weight and gravity and how fabrics behave under those influences when sketching in the future. After looking into how other messenger bags, especially larger ones, solve this issue, I found that it’s most common to have the straps attach to the sides of the bag instead. That this would solve this problem seems to make sense, so I’ll make this change soon.